Black women also made history in 2008.  According to the U. S. Census Bureau in 2008, “Black women turned out at a higher rate than any other racial, ethnic and gender group.”  Also, the Census Bureau reported in 2012 Black voters made history outvoting whites for the first time in recorded voting history and this was due in large part to high voter turnout of Black women. 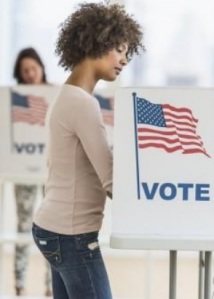 Today, we are on the eve of another defining moment in our nation’s history as we gear up for the 2016 Presidential Election Cycle that will elect the 45th President of the United States.  Voters will also elect 435 members of the U. S. House of Representatives, 34 U. S. Senators, 13 state governors; and 86 of the 99 state legislative chambers.

The 2016 BWR Voter Guide is a non-partisan resource for voters to prepare to participate in national, state and local elections in their communities. The voter guide offers a unique opportunity for voters to learn about the Presidential candidates and their vision for the country.  The guide includes key 2016 election dates for caucuses, primaries, general election, state voter registration deadlines, Republican and Democratic conventions, official presidential debates and much more!

The extensive questionnaire focused on key issues identified by BWR’s research, national and state-based network members and partners that are important to Black women including the ESSENCE/BWR Power of the Sister Vote Poll that was released in September 2015.

What you will find in the voter guide are the candidates’ unedited responses to the questionnaire (along with the letter received from one candidate, and general statements from the respective teams of two other candidates), which are organized in the five policy major categories listed above. These responses along with the candidate profiles provide substantial information about the field; but more importantly, the reader can develop a framework for sifting through all of the positions and policy options that emerge during the election cycle.

We hope voters will find the 2016 BWR Voter Guide useful as they prepare to exercise their right to vote.